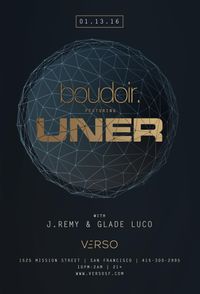 Since his debut in Diynamic in 2009 until his Newcomer Dj Award in 2013, UNER has doubtlessly had the time of his life. After a whole life devoted to music, the reward comes in all levels, gigs all over the globe and his music released by the best electronic music labels; he’s a regular at labels like Visionquest, Cocoon, Cadenza, Cécille or Diynamic, the label which has released on 2014 his debut album, “432”, the most personal view of a UNER that loves house, techno, melodies and vocal harmonies, a work that shows the ripeness and grace status of this Dj and producer and has been very well received among audience and critics.