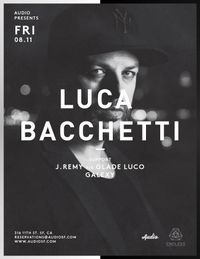 Luca Bacchetti is the first to admit it. Just as musical inspiration runs through his veins and is his very lifeblood, so too is a certain restlessness and a propensity for boredom for a singular musical output that accompanies it. There’s simply too much music to draw from and too much beauty in life that inspires creative expression – whether it be from art or through travel, both of which he embraces with the same lust that accompanies his inspiring sonic shapeshifting career over the past decade.